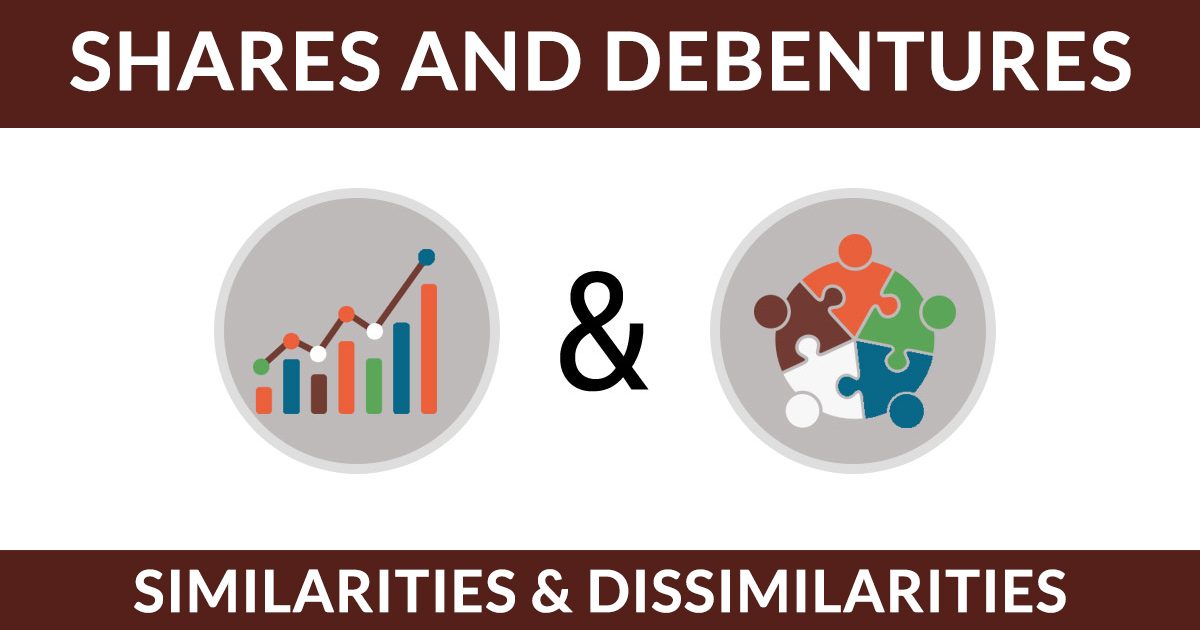 Today every person of every age, caste, and sex is familiar with the terms – Shares and Debentures. Investment in shares and debentures is envisioned as one of the best options to invest your nest eggs for better returns. Although both of them are a kind of securities issued by companies to raise the funds, there is a substantial difference between the two terms.
Where shares signify the share capital of the company, Debentures represents the financial obligation (indebtedness) of the company towards the third party.

Shares depict the proportion of shareholder’s ownership in the company and Share A certificate of purchase of shares which is issued to the shareholders at the time of allotment, reflects the details of the shares including the share price. The share price is the rate at which shares are issued.

The shares are movable/ transferable i.e. their ownership can be transferred. The shares are majorly classified into two kinds – Equity Shares and Preference Shares.

Equity Shares:- The irredeemable shares with voting rights and flexible rate of dividend (depending on the policies and profits of the company) are known as Equity Share.

A Debenture is a long-term debt instrument issued by the company to the public under its common seal, attesting the indebtedness of the company.

Debenture Holders are the individuals who hold debentures of a company.
Debenture Certificate is evidence of debenture issued under the company seal Encompassing terms and conditions regarding interest rate and repayment of capital.

Types of Debentures are as follows:-

In many other ways, the two terms vary from each other. We are presenting some of them:

The holders of shares are known as shareholders who are the owners of the company in different proportions based on the shares they hold and enjoys various rights under the statute. While the holders of debentures are debenture holders, they are the creditors.

At the time of winding up, Debentures are first repaid followed by the repayment of Shares as debentures are a liability and so it needs to be repaid first.

Distribution of Dividend on shares can be referred to as the allocation of profits in some predefined proportion while the interest on debentures is a charge against the profit which the company earns.

Both come with some set of advantages and disadvantages. Where shares come with voting rights in the management of the company, Debentures comes with a fixed amount of interest, whether or not company sprouts profits. Shareholders are the owners of the company while debenture holders get repayment at priority before the shareholders at the time of winding up.