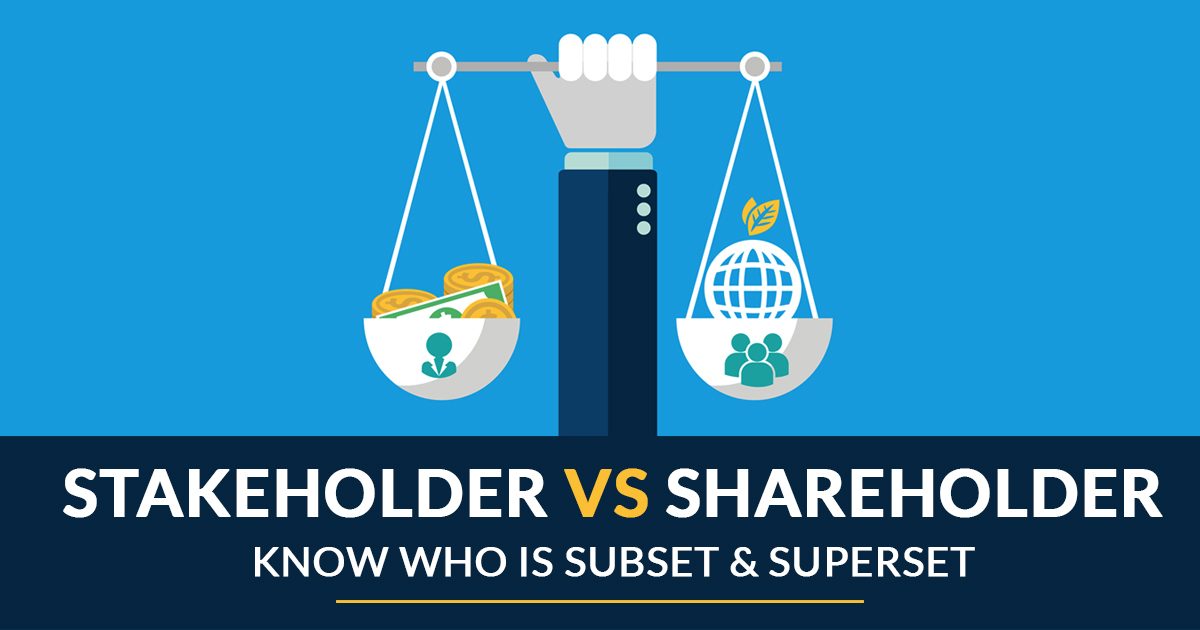 A shareholder is a person or an institution which owns a part of a public or private company by owning its shares of stock. They are generally referred to as members of a corporate entity, having a financial interest in the profitability of the project or organization. Whereas, a stakeholder has an interest in the company’s performance for reasons besides stock performance or appreciation. These facts contribute to the reason that the stakeholders are most desirous for the company’s success over the long run.

Shareholders are the company’s owners and as per the laws and norms of the corporation or shareholders’ agreement, shareholders hold the following (and more) rights:

Read Also: Key Differences Between An IPO and FPO

A stakeholder refers to an individual, organization, or group which gets directly affected by the company’s performance or project’s outcome. A stakeholder has an interest in the success of a project. They can either be internal from the project group or an external – an outside sponsor. Various people can be qualified to be termed as a stakeholder, some of them are as follows:

Although shareholders are the largest kind of stakeholders, as they are impacted directly by a company success & failure but some additional groups associated with the company are also kept in the category of stakeholders.

Key Difference Between Stakeholders and Shareholders

On the other hand, shareholders are more interested in profits, prices of stock, dividends, etc. They are financially concerned with the success of the organization.

For example, if the company is not performing well and suffering losses, the vendors and employees connected will also suffer as the company will stop availing the service of vendor and will not be able to pay the employees well on time or may also terminate them.

Evolution of corporate social responsibility (CSR) has motivated companies to well-consider the interests of stakeholders. CSR is a self-regulating business model that focuses on the company’s social accountability towards itself, public and the concerned & connected stakeholders.

For example, while making any decision, a company may take into consideration the after-effects of the decision on the environment. The decision may be beneficial from shareholders’ point of view as it may bring monetary gains but the decision may not be beneficial from a stakeholder point of view as it adversely affects the environment or citizens, the public here plays a role of external stakeholders. CSR motivates corporate entities to make decisions, keeping the social welfare in mind and lay stress on using & implementing methods which are legitimate & adhere to regulatory requirements.

Wrapping up with thumbnail: