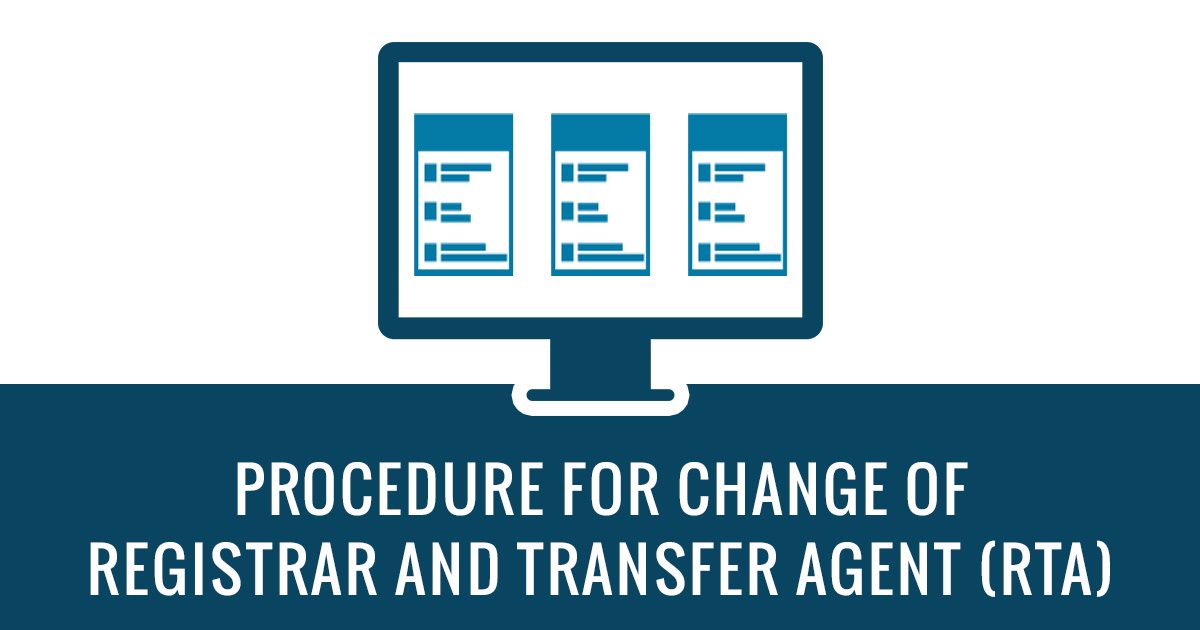 The procedure to change Registrar and Transfer Agent for companies or mutual fund houses requires them to submit a long list of certified documents or copies to the CDSL.

After receiving such documents, CDSL verified each of the received documents and ensure that they are in a prescribed order to proceed with the RTA change request. Once the verification gets completed, an execution agreement is furnished by the Central Depository Services Private Limited (CDSL). to the issuer company/Registrar Transfer Agent.

However, often RTA change procedure takes a long time and requires the companies/mutual fund houses to submit a long list of certified and accurate documents, of which they are generally unaware.

Therefore, the given article will provide detailed information regarding the RTA change procedure along with the mandatory documents that need to be furnished by the companies to CDSL.

In the National Securities Depository Limited (NSDL) depository situation, once the securities are attributed to the investor statement on payout, he becomes the rightful proprietor of the securities.

Here is a list of all the Key Documents whose Certified Copies Need to be Submitted by any Particular Company/Issuer to the CDSL for Change of Registrar and Share Transfer Agent (RTA):

1. Copy of Board Resolution by the issuer approving the change of RTA

In order to change the Registrar & Share Transfer Agent (RTA), after finalization of other documentation within set regulation, the issuer has to issue a copy of Board Resolution approving the changes of RTA by the requisite majority.

A tripartite agreement is a legal document that depicts all the obligations and responsibilities of all the parties, i.e., the issuer/company, its RTA, and CDSL, involved in the agreement. In case of an RTA change request, the issuer or company must submit a fresh tri-partite agreement duly written on an INR 600/- stamp paper and must also be signed by the authorized signatories of Registrar Transfer Agent and company/issuer.

For more details about this agreement, you can visit/download the PDF (Tri-partite (for franking and e-stamping / on stamp paper) Agreement)

A NOC is a legal document that is issued by any organization/entity reflecting that it does not have any objection against the details that are encoded in the NOC document. The companies requesting for RTA change must furnish a no-objection certificate (NOC) from the existing RTA (written on its letterhead) to the CDSL.

For more details about the NOC format of the existing Registrar & Transfer Agent (RTA), you can download the PDF (No Objection Certificate (NOC))

Any particular company furnishing an RTA change request must submit the document reflecting the total application fees charged by CDSL towards the change of RTA to the issuer/company.

For more details, you can visit/download the PDF (Application Processing fees)

The company requesting RTA change to CDSL is also obligated to furnish details about its annual balance with CDSL, NSDL, total issued capital, and Physical shares according to the register of members. All such details need to be filled and certified by the practising Company Secretary (CS)/ Chartered Accountant (CA).

For more detail about the format of CA certificate for the same, you can click on the given PDF (Latest certificate from practicing Company Secretary / Chartered Accountant)

A Master Creation Form/Letter of Intent is generally used by the companies to register as an Issuer with NSDL, allowing it to offer the demat facility to its shareholders by submitting its securities. In case of a Registrar and Share Transfer Agent change request, Master Creation Form also needs to file by the issuer/company to the CDSL on the company letterhead. The Form needs to be duly stamped and signed by the authorized signatories of the company (sign must be on every page).

The company filing RTA change request is also compelled to submit the Letter of Acceptance/Consent (LOA) to the CDSL, indicating that the new RTA is ready to handle all the responsibilities related to managing company securities. This LOA needs to be written on the new RTAs letterhead.

You can easily download the document format for LOA from the given PDF (Letter of Acceptance/Consent) Note: LOA is not required in the case of in-house RTA.

Lastly, the issuer/company requesting for Registrar & Share Transfer Agent change to CDSL is also required to furnish a declaration statement on behalf of the company indicating that it will comply to all the mandatory rules and regulations related to change of RTA. The company also stands responsible for handling all the grievances/complaints that might arise during the change of RTA.

To get more details about the declaration document structure, you can download the PDF (Declaration from Issuer Company)

9. Outstanding Charges, if Any

The issuer must fulfill any outstanding charges of previous RTA before changes. It is also included in the complete process and must be listed while the changes of RTA are in Finalization.