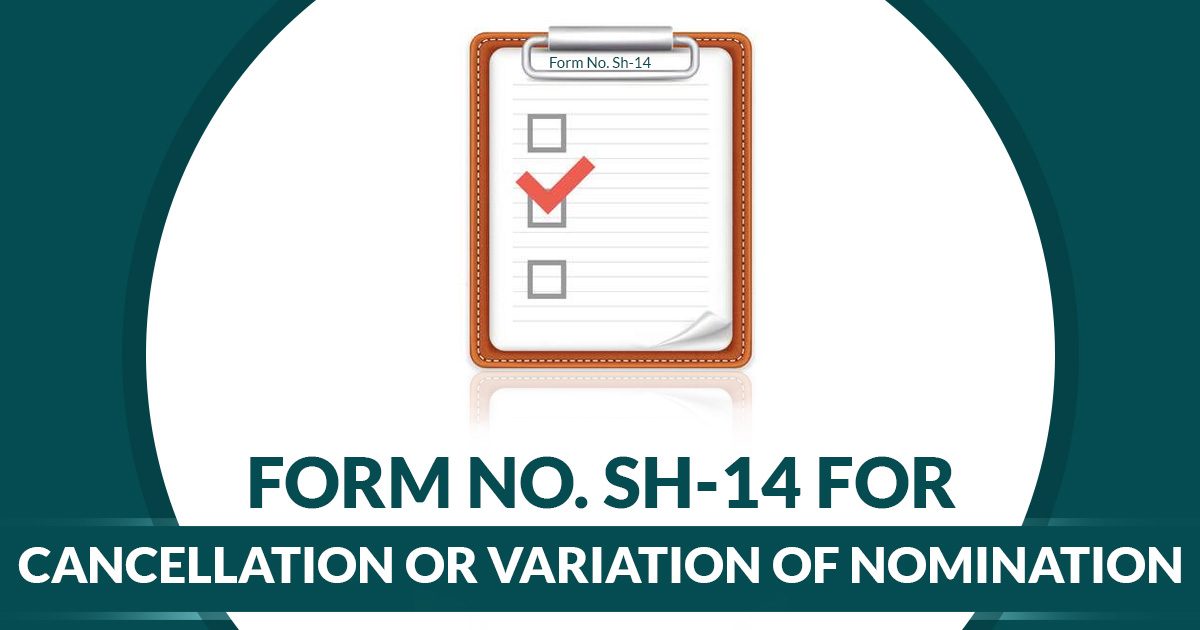 This is the Form No. Sh-14 to be used when you need to cancel or update an existing nomination. You can find here the application format along with the step-by-step procedure for filing the form Sh-14 for cancellation or variation of nomination.

Note: Read the instructions given at the end of this post carefully before you start to fill up this form.

Sh-14 How to Apply Form No. Sh-14 For Cancellation or Variation of Nomination?

The form has the following sections:

Application for Cancellation of Nomination:

If you want to cancel an existing nomination which you made earlier, use the first of the two sections in the application. Provide the Company Name & Address to which the application is addressed. Then, enter your name, name of the nominee (to be cancelled), and nominee address.

Application for Variation/Replacement of Nomination:

If you want to request to replace an existing nomination in the favor of a new nominee, you need to use the second section of the application. Hereby, you need to provide your name and the name of the old nominee (to be replaced).

Do not fill up both the sections in any case. If you fill the second section for adding a new nominee as a replacement, the old one will be automatically cancelled.

1) Particulars of the Securities (In Respect of Which Nomination is being Cancelled/Varied):

This table will contain details of the securities for which a nomination is being cancelled or replaced. Enter the nature/type of securities, folio number, no of securities, certificate no, distinctive no, etc.

2) (a) Particulars of The New Nominee:

Use this form only if you are going to add a new nominee as a replacement to the old nominee.

Fill up the details of the new nominee, including their name, father/mother/spouse name, date of birth, nationality, phone no, address, email id, and their relationship with the security holder (you).

(b) In Case New Nominee is A Minor:

If you’re adding a new nominee who happens to be a minor (below 18 years age), then use this form to provide the details of the guardian.

3) Particulars of Nominee in Case Minor Nominee Dies Before Attaining Age Of Majority:

If you are adding a new nominee who is a minor, you also need to add an alternative nominee who will become effective in case if the minor nominee dies before attaining the Age of Majority (18 years).

Provide the name, father/mother/spouse name and other details of the alternate nominee.

The last table will contain the details of policy (security) holders, including their name/s, signature as well as the name, address & signature of the witness.

Instructions to be Followed: